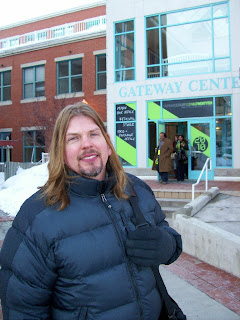 Hey foks-
As I mentioned in my last post, I was going to be on my way to attend the 2010 Sundance Film Festival in majestic Park City in Utah. The event lasts about 10 days and due to my schedule, we attended the last 3 days of the festival. My girlfriend, Angela, has a family friend named Brian Jones who owns a production company called Hanger 3 (http:\\www.hanger3productions.com) and has worked in the past as one of the volunteers at the Festival. Brian was attending this year in the capacity as a producer/director and had arranged for us to stay with him at a condo in nearby Midway.
This was my first such event and I asked Brian, a man of seemingly infinite patience, what is the main focus of the festival, what are film makers trying to accomplish and how does one go about making a movie anyway?
It turns out that there are quite a few applicants – probably in the thousands, of filmmakers wanting their film to be shown at the festival. Of those, about 200 are chosen to actually be shown at various theaters in the area. Some are feature length (80+ minutes) while others are short films (called “shorts”) and may be around 15 minutes in length. Few, if any, of the films submitted have been snatched up by a distributer at this point (like Lions Gate, or Miramax) but if it’s a feature film, that is the hope that it will get picked up. Shorts might get picked up for a DVD compilation or maybe shown on a Cable channel like Sundance or the Independent Film Channel (IFC). This is really about artists trying to get their work noticed, for the primary reason of getting yet more funding to go out and make another film.
Brian drove us around in his rental car and when we weren’t talking about our Droid phones (we are both new owners) I questioned him about how one gets started in this highly competitive industry.
One of my favorite film makers, Kevin Smith, made his debut with a feature called “Clerks” that was filmed in black and white at a convenience store at night where he worked during the day. That film launched his career and cost him about $25,000 to make. Clerks was shown at the Cannes film festival in France.
So using that as kind of a base line, I asked Brian what was the complete bare minimum it took to make a movie. He said it could be be done for as little as $7,000 today, and that would involve people taking on multiple roles – Produce/direct, Sound and editing, a Grip (someone who makes sure the area to be filmed has electricity, etc) and camera rental. Gone is film – it’s all digital so the choice of filming in black and white to save money (like Kevin Smith did) no longer applies. The camera of choice today is the Red camera (“http://www.red.com/”). People use various software to edit cuts and audio. So with about $7k and 6 or 7 people, you can create a film. Of course, making a film that people stand up and take notice is the hard part. And that brings us to Sundance.
The first movie that Angela and I got to see was “D0uchebag”. This was a comedy/drama done by Jonathan Schwartz, Super Crispy Entertainment and was a seemingly very low budget movie about a man, Sam Nussbaum, who is about to be married. His plans take a detour when he is reunited with his estranged brother by his fiancee, in the hopes that his brother comes to the wedding. This becomes a bit of a road film as the two take off to find his brother’s long lost 5th grade love. Comparisons to “Sideways” are inevitable here, although the focus is more on Sam and his relationship with his brother.
While not as good as “Sideways”, the film was enjoyable and we the public were given a piece of paper to vote with. The four corners are marked “Fair”, “Good”, “Better”, “Best” and you vote by tearing the corner that best reflects your opinion of the film. 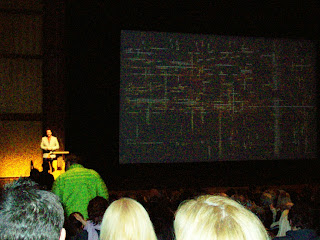 After the film, the director came up with the actors for a Q & A session. It turns out the actor who played Sam was not an actor – he was an editor and the director wanted him to act this time. The director was very humble and gracious and they looked like a great group of people.
On a side note, I noticed some of the band names that played on the soundtrack including “G*dd*mn Electric Bill” (asterisks mine). That is the most unique band name I’ve heard in a long time. The band is promoting the film on their website.

The next day we got to see a move called “3 Backyards” – a film by Eric Mendelsohn. At first I thought it was a “slice of life” kind of film, but although the story takes place in a single day, there are 3 parallel and non-intersecting story lines that all have a significant event that takes place.

In home guitar lessons in the Tri-Valley area of California. This includes Pleasanton, Dublin, San Ramon, and Livermore. Other arrangements negotiable.